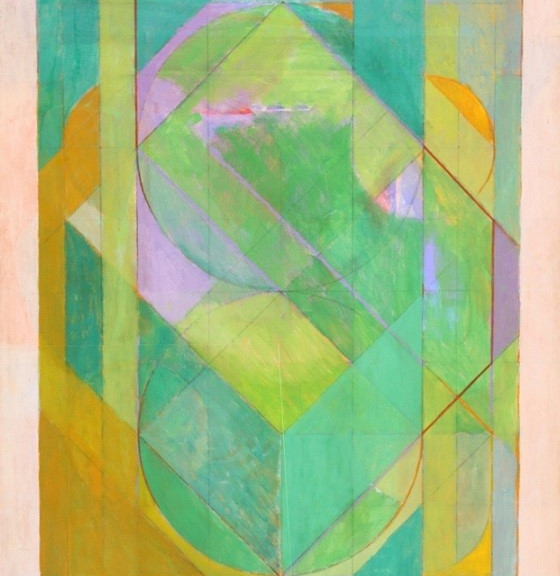 FAE is pleased to offer artworks from William Campbell Contemporary Art, by painter and sculptor Richard Neidhardt (1921-2009). These artworks span decades of an accomplished career, and yet not one could be recognized for its date. Artist-cum-globetrotter, Neidhardt tapped into a distilled aesthetic that remains fresh.

Neidhardt was born in Chattanooga, TN, and served as a transport pilot for Pan American Airways during World War II. He earned his BA from the University of Tennessee at Chattanooga, his MFA from the university of Florida, and his Ph.D. from Ohio State University. He taught at Austin College in Sherman, TX, from 1967 to 1986, retiring as professor emeritus. He was awarded several grants, and his artworks are widely included in Texas museum collections.

His time in service as a transport pilot came to be deeply influential to Neidhardt’s artwork. He flew routes through Europe, South America, Africa, the Middle East and India, gaining a worldliness that informed his artwork throughout his career. Neidhardt processed these influences by distilling them down to their essence. He describes this philosophical geometry in his artist’s statement,

“Most of my earlier paintings were formal architectural and semi-abstract statements with little subject matter. This approach would evolve into mostly non-objective geometric explorations with shape and color. Increasingly, I became fascinated with subtle interrelationships existing between forms, colors, space and time. Simplicity and attention to edge became hallmarks.”

There is a rigorous analytical quality to Neidhardt’s paintings, which he describes as “the aesthetics of mathematics and the energy of color”. His paintings would often feature an underlying grid and a precise Mondrian-like application of color, perhaps owed to his 1953 Fulbright Award for research in the Netherlands. Neidhardt spent a year at the Rijksacadamie in Amsterdam, developing his philosophical geometric painting style.

“They came from a side of me aware of being a fellow inmate of the earth with all of its absurdities, a possible justification for being a part of this great mystery. My output was prolific; many images were cast in bronze. I presented singly, conditions and attitudes common to mankind, and did so as simply and honestly as possible. The presentation is universal and generic, often a formal frontal stance with possible roots in Egyptian, Minoan and late archaic Greek sculpture.”

One such pan-cultural edition is Gothic Man, 1987, standing 8 inches with the help of several flying buttresses. The Gothic Man’s posture echoes that of a Greek kouros, less idealized. His architectural armatures enable him to stand taller, and at the same time keep him cemented in situ.

Neidhardt’s 1989 small bronze edition Golfer reads as a wry interpretation of a Pharaoh’s sarcophagus. The symbolic crook and flail are replaced with golf clubs, and Pharaoh’s headdress re-imagined as a golf ball and tee. The smoothed-down face quotes those of Minoan fertility totems. With this sum of references, does Golfer add up to a retiree’s kingly sendoff, or totem for a fruitful outing?

Neidhardt’s artworks have been shown in galleries and museums,  in solo exhibitions at the Art Museum of Southeast Texas (1991) and The Grace Museum (2001).  In 2010 Austin College memorialized their late professor with the exhibition “Richard Neidhardt: 1921-2009: A Retrospective of Sculpture and Painting”.

Neidhardt’s pan-cultural approach has seemingly immunized his artworks to the pitfalls of dated colors or trends. His paintings’ clean lines and colors have a perpetually contemporary energy. His sculptures are keenly arranged amalgams of classical elements. With his global visual language and “mathematics of aesthetics”, Neidhardt’s artworks have both humor and a timeless appeal.